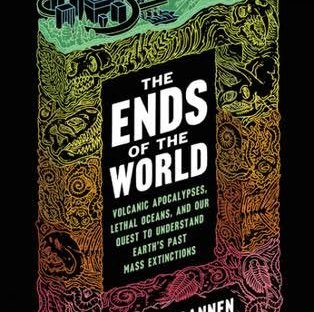 This book came to me when I needed it most. At the beginning of the year, towards the harrowing end of Australia’s Black Summer (you know, in that time before Covid), I was feeling at a complete loss. I was grieving for a world we are on the brink of losing, overwhelmed with climate anxiety. Questioning what the fuck was I thinking bringing two children into this world, a world of fire and brimstone, a world that soon may no longer host koalas. It was an idle Monday afternoon at the library, just passing time when The Ends of the World jumped out at me.

Was it really and asteroid that killed the dinosaurs? Or carbon dioxide driven climate change? In fact, scientists now suspect that climate change played a major role, not only in the end of the age of dinosaurs, but each of the five most deadly extinctions in the history of the planet. Struck by the implication of this for our own future, Peter Brannen, along with some of the world’s leading paleontologists, dives into deep time, exploring each of earth’s five dead ends and in the process, offers us a glimpse of what’s to come…. As our civilization continues to test the wherewithal of our climate, we need to figure out the where the hard limits are before it’s too late. Part road trip, part history and part cautionary tale, The Ends of the World takes us on a tour of the ways that our planet has clawed itself back from the grave, allowing us to better understand our future by shinning a light on our past.

Although the content may seem dry, Brannen uses language that is engaging and in some places entertaining. Each chapter briefly outlines a geological epoch, Brannen then goes into detail on the theories of what brought it to it’s knees, detailing the Earth’s five previous mass extinctions. In each description Brannen lays down multiple explanations for the mass extinction, however, the five previous mass extinctions have all been associated with changes to the planet’s carbon cycle – exactly what we’re doing now.

For instance, was it the commonly believed theory of an asteroid hitting the earth that wiped out the dinosaurs, or was that just the tip of the iceberg. Was it in fact climate change caused by the mega volcanoes that erupted around the same time in India, that are estimated to have covered 1,500,000 km2 of the earth in lava?

This was a fascinating read (especially if you’re into archaeology), but what I really loved about it was, reading this book lead me to an epiphany. I started to really think about how small I am. How small we are. Dinosaurs were around for about 165 million years, humans have been around for only a couple of million, Sapiens for at most, 200,00 years. There’s nothing like a trip back in time over millions and billions of years to make you feel very, very small. As the Scottish philosopher, David Hume said:

The life of man is of no greater importance to the universe than that of an oyster.

What if this is the trajectory we’re supposed to be on? It seems homo sapiens have been on a mission to conquer the earth since we evolved. It’s suspected we dominated all the other species of human through genocide some 100,000 years ago (we are in fact a different species of human rather than having evolved from Neanderthals). Some say we started the ball rolling on our own demise when we eliminated all the mega fauna thousands of years ago and jumped to the top of the food chain. We haven’t learned from past civilisation collapses where we pillaged the earth, like Easter Island. And what if we weren’t facing a climate emergency? Would there be some other threat like health (pandemics, obesity, toxins, cancers) or technology (AI) that would put a dent in our numbers? What if we can’t change what the universe has in store for us?

We often think that the climate crisis will cause the end of the world. This is not true. This is our self centered egocentric downfall. The world will go on without us. Rats, cockroaches and pigeons will probably survive and go on to evolve into something better than us. Birds are descendants of dinosaurs afterall. These animals will hopefully be more in tune with this planet we call home. Hopefully they’ll treat her with more respect and know at any given time she can destroy us with her forces of nature.

Then the full force of this hit me (after reading the final chapters of the book). I realised, we have to go extinct at some point, regardless of human induced climate change. Whether it happens now because of our own doing or if its in 50,000 years when the earth tilts and causes the next ice age, or in 250 million years when the continents collide to create one land mass again or 800 million years when the sun expands so much that earth can no longer support life, or, at any given time a rogue asteroid hits us. Whether it’s us now or a generation 100,000 or millions of years from now, we will have to deal with our extinction at some time or another. Us and every other living thing on this planet will eventually go extinct (except maybe tardigrades).

Perhaps this is premature extinction, but perhaps it’s the only way, and from our ashes a smarter breed of animal will arise What we are currently doing to the earth is only as bad as the any of the previous mass extinctions. So if this is it for us and koalas, the earth will prevail. The silver lining, according to Brannen is, it will take 100,000 to 150,000 years for the carbon to be washed out of the atmosphere – a mere blip of time in the grand scheme.

Perhaps my eco anxiety is me trying to control the future, “demanding certainty in a world that is always tentative and uncertain“.

This is a hard pill to swallow when you have two small children and it’s a crime that we’re taking almost all of the other animals with us, but perhaps there are only two things to do: